If you have ever driven south on Highway 99E (McLoughlin Blvd) out of Portland, you may have noticed a beautiful Queen Anne style house just south of the Ross Island Bridge (3040 SE McLoughlin Blvd). It is striking for its beauty and also because of its unfortunate placement by a busy highway and a busy bridge.

It wasn’t always this way, though. Johan Poulsen, along with Robert D. Inman, was part owner of the Poulsen-Inman Lumber Co. on the east bank of the Willamette River, just south of where OMSI is now. (Read more about the lumber company.) In the early 1890s (the exact date seems to be unknown) the two men built identical houses on the bluff above the Willamette River, on either side of Powell Blvd. Poulsen’s house had three carved oak fireplaces, cut glass light fixtures, and ornate tooled brass doorknobs. The westward view from the towers on the two houses was magnificent.

When the Ross Island Bridge was finished in 1926 and McLoughlin Blvd finished in 1932, the appearance of this neighborhood was greatly changed. The beautiful lawn that surrounded the house was gone, and Dr. Huthman built up a concrete retaining wall below the house.

The photo below shows the Poulsen House sometime in the early 20th century. Notice the beautiful sloping lawn and small stone retaining wall. Here is the house from roughly the same angle in 2012. McLoughlin Blvd is in the foreground and the Ross Island Bridge is just behind the photographer. The photo below shows the house as seen from the Ross Island Bridge. The huge tree in front of the house is a Camperdown elm, the largest and oldest in the state and estimated to be 100 years old. The house was listed on the National Register of Historic Places in 1977, and in 1978 an Historic Preservation Fund grant helped restore the old house. It got a new paint job in 2008 (apparently that beautiful yellow color is called “beeswax”). But what became of the twin, Inman’s house across the street? Sadly, it was torn down to make way for a parking lot in 1958, an event captured by Oregonian photographer, Dick Farris. The photo below appeared in the November 26, 1958 issue of the Oregonian, under the heading “Grandeur of Bygone Day Topples”. The photo below shows the Inman House from the Ross Island Bridge, in happier times. 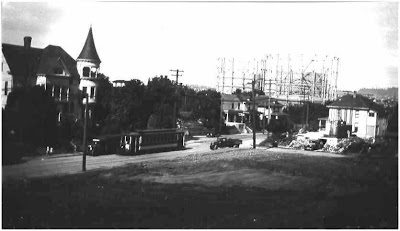 Location of Paulson House in Portland: