Robert Moore was born in Franklin County, Pennsylvania, on October 2, 1781. In 1805 he married Margaret Clark and together they later moved to Illinois. In 1839 they headed west on the Oregon Trail with the Peoria party and arrived in Oregon City in 1840. He negotiated the purchase of a 1,000 acre site from Chief Wanaxha of the Wallamut Indians. The site was on the west bank of the Willamette River, directly across from Oregon City, the territorial capital at the time.

In 1843 he established a community on his land and called it Robin’s Nest. According to Oregon Geographic Names,

On December 20, 1945, Ernest E. East of the Illinois State Historical Society wrote Miss Nellie B. Pipes of the Oregon Historical Society as follows: “It is not impossible that Robert Moore got the poetic inspiration for ‘Robin’s Nest’ from the name of the log house in which lived Philander Chase, first bishop of the diocese of Illinois, Protestant Episcopal Church. Chase bought land in the valley of Kickapoo Creek about 12 miles west of Peoria and established Jubilee College. His first house was called ‘Robin’s Nest,’ because, as he said, it was ‘built of mud and sticks, and filled with young ones.’”

The photo below was taken from the bluffs on the east side of the river and shows Oregon City in the foreground and Linn City in the background. By 1845 the town had two log houses and a large number of tents occupied by settlers who had arrived the previous autumn. On December 22, 1845 Robin’s Nest was renamed Linn City in honor of Senator Lewis F. Linn of Missouri. (Linn was a friend of Moore’s and and later authored the Donation Land Act of 1850.) In 1846, about 15 houses were occupied by mechanics, men employed in Moore’s flour and lumber mills, and men worked on the ferry that Moore had established as a connection to Oregon City. Linn City was home to the Oregon Milling and Transportation Company, which built a sawmill, gristmill, a warehouse, and wharves. There was a breakwater to allow boats to load and unload cargo, making Linn City a major transportation center on the river. By 1850 Linn City had a post office, hotel, and two general stores. 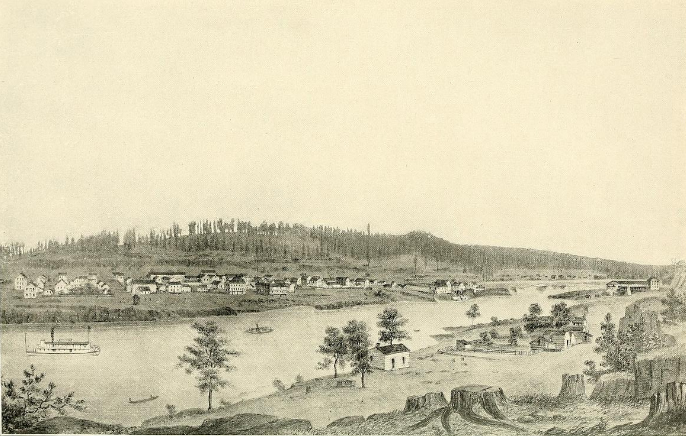 This 1858 drawing shows Linn City in the foreground and Oregon City in the background (The Centennial history of Oregon, 1811-1912)

On September 2, 1857, Robert Moore died before he could fulfill his dream of making Linn City a thriving and prosperous town. According to the 1860 census, the population of  Linn City was just 225 people. Disaster struck twice in 1861. On April 23 a disastrous fire destroyed the mills, warehouse, and the steamer James Clinton. An Oregonian article on April 25 described the blaze:

Business owners in the community refused to give up, however, and men started rebuilding what had been lost. Then in December a catastrophic flood swept through. Here’s how the flood was described in the Oregon Historical Quarterly:

The flood of December 1861 washed clean the rocky banks of both sides of the Willamette just above and below the falls and inundated the entire Willamette Valley. It swept the flouring mills of Daniel Harvey and James Guthrie, the machine shop of Moore & Marshall, the Linn City warehouse and basin owned by Colonel James K. Kelly and Robert Pentland, Abernethy’s pioneer brick store and two hotels on the Oregon City rock bank of the river, and carried away to destruction every structure and building in the neighborhood of the falls. On December 5, the steam flatboat St. Clair, Captain S. R. Smith and Engineer Alonzo Vickers, passed over the falls, close to the Oregon City side, the river having swelled to the condition of navigable rapids. It was estimated at the time that below the falls the river had risen 75 feet. The trip of Smith and Vickers is notable, as they were the only persons who ever came over the falls of the Willamette in a boat under steam.

Only two houses and a warehouse still stood after the flood waters had receded. Linn City had been wiped clear off the earth. Residents admitted defeat and the town was not rebuilt. The photo below shows Willamette Falls, the Oregon City Paper Mill, and the west bank of the river where Linn City once stood. Over time people started trickling back. The Willamette Falls Locks were built at the former site of Linn City in the 1870s, and the Crown-Zellerbach Pulp and Paper Company established its mill near the locks in 1889. Houses started appearing on the west bank of the river, albeit on high ground this time. In 1913 West Linn was incorporated as a city.